Dynamic Access Control (DAC) is an access control model for documents, which automates the assignment of users to document roles. In previous releases, you had to manage groups and override rules when using DAC. Unlike role defaulting with the previous access control model, DAC can add and remove users from a role without any trigger action on the document by editing users’ membership in new Auto Managed groups.

Note: When implementing any custom security or access control, Admins should perform UAT (User Acceptance Testing) before making changes on a production site. Some changes can affect application-specific functionality in ways that make Vault difficult to use.

There are two kinds of setup to think about with DAC for documents. The first is your initial configuration and subsequent periodic re-configurations. The second is ongoing maintenance.

Before starting any DAC configuration project, think through your access control model. For example, across all of the roles automated through DAC, what criteria (up to five fields) will be necessary to match users to documents? During this phase, you may want to consult Veeva Services for additional recommendations.

Once your organization has a plan in place, you can begin configuring. We recommend enabling Configuration Mode while completing the following setup tasks.

Note: Any role assignment that occurred before DAC (through defaulting or editing in a document’s Sharing Settings panel) is considered a manual assignment. Enabling DAC on a role does not affect any assignments that have already occurred.

As new users come on-board, existing users change roles, and other users leave, you’ll need to maintain your access control settings by creating, updating, and deleting User Role Setup records. When this happens, Vault automatically recalculates group membership to make sure that these users have the correct lifecycle roles on the correct documents. If these edits result in the creation of a new Auto Managed group, there will be a delay as Vault calculates access for the new group. Depending on the number of documents affected, the delay may take up to several minutes. A notification banner displays in the configuration screen while this operation is in progress.

Role reassignment happens automatically when a document’s field values change, which can occur as part of a lifecycle state change, a workflow, or a user edit. This does not require any Admin action. For example, a sharing rule that applies to DOC-1039 uses the Country field value to determine and assign access. The Country field on Doc-1039 is blank, which affects which users have access. When Doc-1039 goes through a workflow in which a user updates the Country field, Vault automatically reassesses and changes the document’s role assignments.

Note: Role assignment is based on document field values for the latest document version. 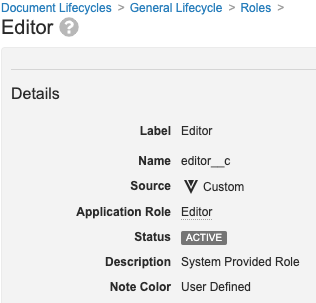 The Promo Binder and Promotional Pieces lifecycles both include a role called Reviewer and both roles use DAC. Those two lifecycle roles map to the same Application Role record: Reviewer AR. Both lifecycle roles have sharing rules that match based on Product and Country fields.

When an Admin creates User Role Setup records, she makes the following selections:

If you are working on a new implementation, we strongly recommend aligning the configurations for any lifecycle roles that use the same application role. This will allow you to benefit from future enhancements that will simplify administration.

In existing implementations, you can leave your configuration as is. Your Vault will continue to work as expected.

Sharing rules provide a dynamic way of controlling which users are in which roles. When creating a sharing rule, you’ll define object reference or single-value picklist fields on both the document and the User Role Setup object. Vault uses the values in these fields as matching criteria for an Auto Managed group to get access through the lifecycle role you’re configuring. For example, both the User Role Setup object and documents have the Product (product__c) field set up. The sharing rule defines matching on this field. When the rule is active, Vault checks if the Product value for the current document version matches the Product value for a User Role Setup record.

If your role should give access based on a very specific match as well as a “partial” match, you can set up multiple sharing rules. For example, Site Managers could get Approver access through matching criteria on Study, Study Country, and Site fields, whereas Study Managers could get access through matching criteria on just Study.

Sharing rules can match on a document’s object lookup field, as long as the field it points to is an object reference or a single-value picklist. For example, to support a rule that matches on Product: Therapeutic Area, you’d need to create a Lookup-type field on the document. On the User Role Setup object, you’d create a Picklist-type field that uses the existing Therapeutic Area picklist.

How to Create Sharing Rules

To create a sharing rule:

When you initially create or modify a rule, Vault must reindex records to apply the new settings. This may take up to several hours.

How to Edit & Delete Sharing Rules

To modify a sharing rule, return to the Sharing Rules tab on the object configuration and click into a specific rule:

By default, when defining rule criteria, Vault maps User Role Setup fields to document fields with the same name (excluding suffix). If more than one active document field references the same object, picklist, or lookup field, you can select from the available fields in the drop-down. Note that once you define a sharing rule that maps such a field, that mapping will carry through to all subsequent sharing rule definitions.

Dynamic Access Control matching rules look for exact matches between field values. When a field is included in a sharing rule, blank field values will only match to other blank field values. For example, a User Role Setup record where the Country field is blank will only match documents where the Country field is blank. Blank values used in a rule are treated like other values, not like wildcards for matching. Vault does not consider values for fields not included in a rule.

Your Vault can have up to eight (8) sharing rules per role.

When you enable DAC for a role, users with the required permissions can still manually share a document by adding another user to a role. Users can also add users to roles when starting a workflow. Manual assignment respects the Allowed Group setting on the role configuration.

Users can never use manual assignment options to remove groups assigned through sharing rules from their roles.

When you select a Document Type Group for base document, a document type, or a subtype, all child levels inherit that lifecycle. You can change which group is selected at any level. When you do so, any children of the edited type or subtype will now inherit the new value.

For a given document type, subtype, or classification, you can select multiple Document Type Group records. Doing so can help you support more complex sharing rules.