Vault allows you to monitor scheduled, in-progress, and completed job instances, and also to take various actions on scheduled and in-progress instances. The Admin > Operations > Job Status page displays statuses for both scheduled jobs and jobs run via Vault Loader.

About the Job Status Page

On the Job Status page, instances are separated by their current state:

Scheduled
Shows the next scheduled instance for active jobs. Vault Loader jobs cannot be scheduled and will never appear in this list.
Running
Displays instances that have started, but have not yet completed.
History
Shows a log of all past job instances for the Vault, including canceled instances or instances that encountered errors. In this section, you can click a Job ID to see the job definition that was in effect for a particular instance.
On the Job Status page, each section shows the most recent instances. If there are more than can appear on the main page, clicking View All displays a full listing. From the full listing, you can apply filters to find a specific instance, instances from specific dates, instances for a specific job, or instances with a certain completion status. 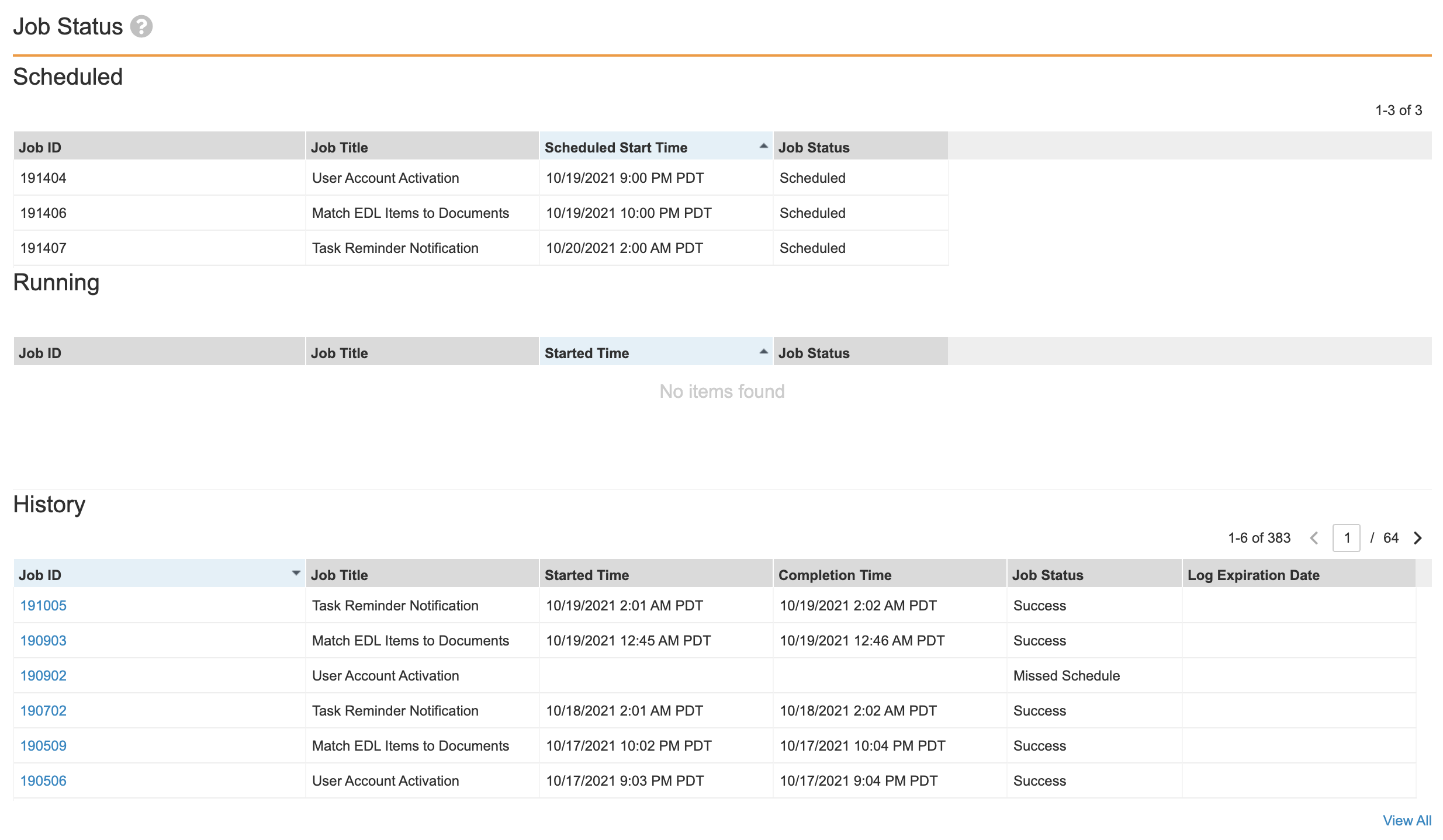 You can review job instances from Admin > Operations > Job Status. Access to this page is controlled by the Admin: Operations and Admin: Jobs permissions.

You can use the Actions menu on each instance to access its options. The options vary based on whether an instance is scheduled, running, or complete. Many of these actions only apply to scheduled jobs, not Vault Loader jobs.

For completed job instances, the following statuses are possible:

Success
Job instance completed without problems.
Cancelled
An Admin cancelled job instance.
Errors Encountered
Job instance encountered one or more errors, for example, Vault cannot update a document because it has an in-progress workflow; Vault cannot send a notification because the document has no users in the selected role, etc.
Failed to Run
Vault encountered an internal error starting the job. If this occurs for a scheduled job, contact Veeva Support. If this occurs when using Vault Loader, check that your parameters were valid.
Missed Schedule
Job instance skipped because it could not start during the scheduled period. A job tries to run as close to the scheduled time as possible. If Vault is unavailable at that time because of maintenance, a system outage, or too many simultaneous jobs, the job continues trying to run for approximately 5 hours after the scheduled time. If the job cannot start within that window, Vault skips the instance. If your jobs regularly miss their schedules, contact Veeva Support. You may need to stagger your jobs’ start times or reduce the total number of jobs by combining similar jobs.